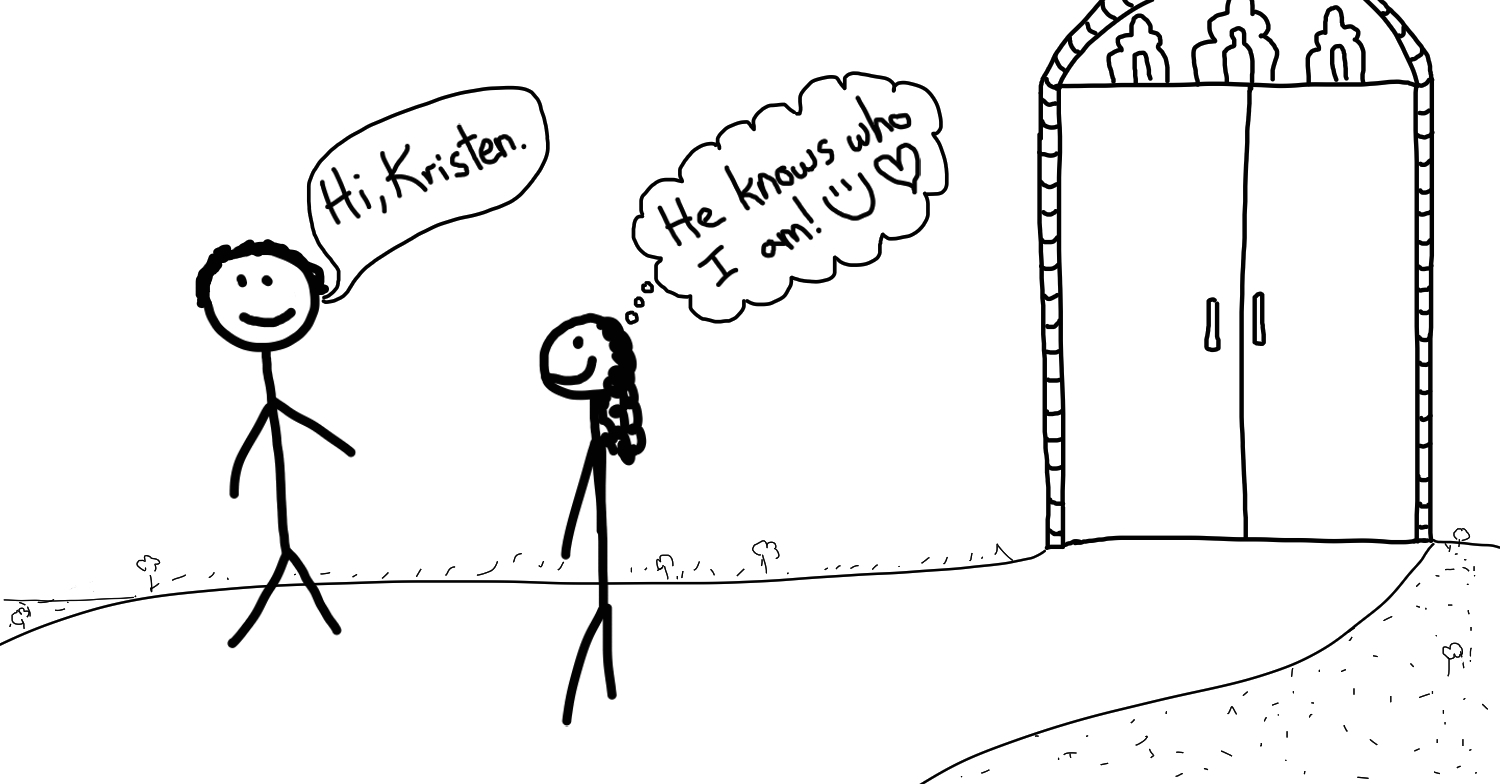 Please be advised that this post discusses suicidal thoughts and planning.

When I stayed at the Crisis Stabilization Unit (CSU) for about a week, I went out on pass a few times. Going out on pass for a short break or a few hours was encouraged in order ease back into the real world. On my first pass, I walked to my church, hoping I could talk to someone for a while and feel some love and care from my church community. I wasn’t sure if anyone would be there, so I tried not to get my hopes up too much, but there was still one particular person I was hoping to see.

I rang the doorbell when I arrived, and that particular person, Kurt, opened the door! He seemed happy to see me, greeting me by saying my first and last name cheerfully. Pleased, I thought, “He even knows my last name!” Half a year earlier, it made my day when Kurt saw me at church and said “Hi, Kristen.” My church is pretty big, and he knows a lot of people since he’s on staff, so I wasn’t expecting him to know me. I was delighted! I was also surprised, which threw me off, so I’m not even sure if I said “Hi” back!

Kurt followed his greeting with the common question, “How are you?” (To jump ahead in my story, I still get to spend time with Kurt and his family, but I still struggle with feeling like a burden, so when I think of the time they still spend with me, sometimes I think back to this moment and somewhat jokingly and somewhat sincerely think, “Ha! It’s your fault. You asked me how I was.”) Anyway, I responded with an uncommon answer, “I’m on pass from the Crisis Stabilization Unit!”

“What, like, right now?” he asked. “Ya!” In the stairwell just inside the door, I proceeded to tell him about being at the CSU and how his lecture four months earlier on depression and his experience with depression was one of the things that helped me finally reach out for help.

After talking for a few minutes in the stairwell and taking a look at a project Kurt was working on, Kurt asked if I would have time to chat a bit more. I was hoping he would have time for that, so I was relieved and glad he asked. I told him all about my struggle with depressive symptoms over the past years (not calling it depression yet) and how I had planned my suicide for a few days before, but had gone to the Crisis Response Centre and Crisis Stabilization Unit instead. He said, “God bless you for not following through with your plan.” That’s another phrase that has stuck with me.

We hadn’t started getting to know each other before that day. Kurt wouldn’t have known that I was specifically hoping to see him when I went to the church. He didn’t know until four months after his lecture that it had helped me. He wouldn’t have had any idea that simply saying hi to me had made me feel seen and cared about.

I’ve shared this story with Kurt, but we don’t always hear the ways we have helped people. Sometimes people will tell you right away that you helped them, and sometimes you won’t know for four months. Sometimes you’ll never know the impact you’ve had on the people around you. This story reminds me that the smallest acts of kindness, taking the time to talk to someone, sharing your story, or helping people through your vocation all make a difference in people’s lives, including in ways you don’t always know.

Suicide is terrible and tragic. It can be hard to talk about. It can be frightening to hear about. I am not encouraging suicidal ideation as a solution or trying to shock and harm with my words. I am sharing a part of my story, showing what depression can be like. This is one very real and serious part of my story that should not be left out. Talking about suicide can be difficult, but talking about these thoughts instead of hiding them can save lives. I am not the only person struggling with a mental illness who has been in this place. Thankfully, I also have other parts of my story that include difficult and ongoing healing. These parts of my story will come later.

I wholeheartedly agree with Kurt - "God bless you for not following through with your plan.”

And once again, I thank you for inviting others into your story, your mind and your heart. It is an honour for all of us reading your words to be a part of your healing journey. It is so encouraging to see glimpses of humour as you look back to where you were a year ago. Also how God cared for your heart and connected the dots that led to Kurt opening the door on the day you so deeply needed validation of your decision to choose life over suicide.

And now Kristen, you are giving us all a reminder and exhortation of how immensely significant seemingly unimportant events might be to someone. You are so right in saying we may never know the impact our words and actions have on someone's life. The scary part is that so can a lack of words or actions. I am challenged by this. Thank you. And thank you for sharing because your courage to share openly and vulnerably is impacting someone's life. It is.

I am truly amazed at how our gracious God sets up appointments for us!! I too echo Kurt’s words “God bless you for not following through with that plan”. I thank God for Kurt and placing him in your life at this specific time. As a leader in a church as well, it is so encouraging to hear from someone you have unknowingly helped. It encourages us to keep going and know that we are making a difference. Thanks for your courage to share your story!

Isn’t the love of God and the plans He has for us simply amazing??? It’s always so cool to look back and realize how God is working in our lives when we didn’t even know it!! Praise the Lord!!