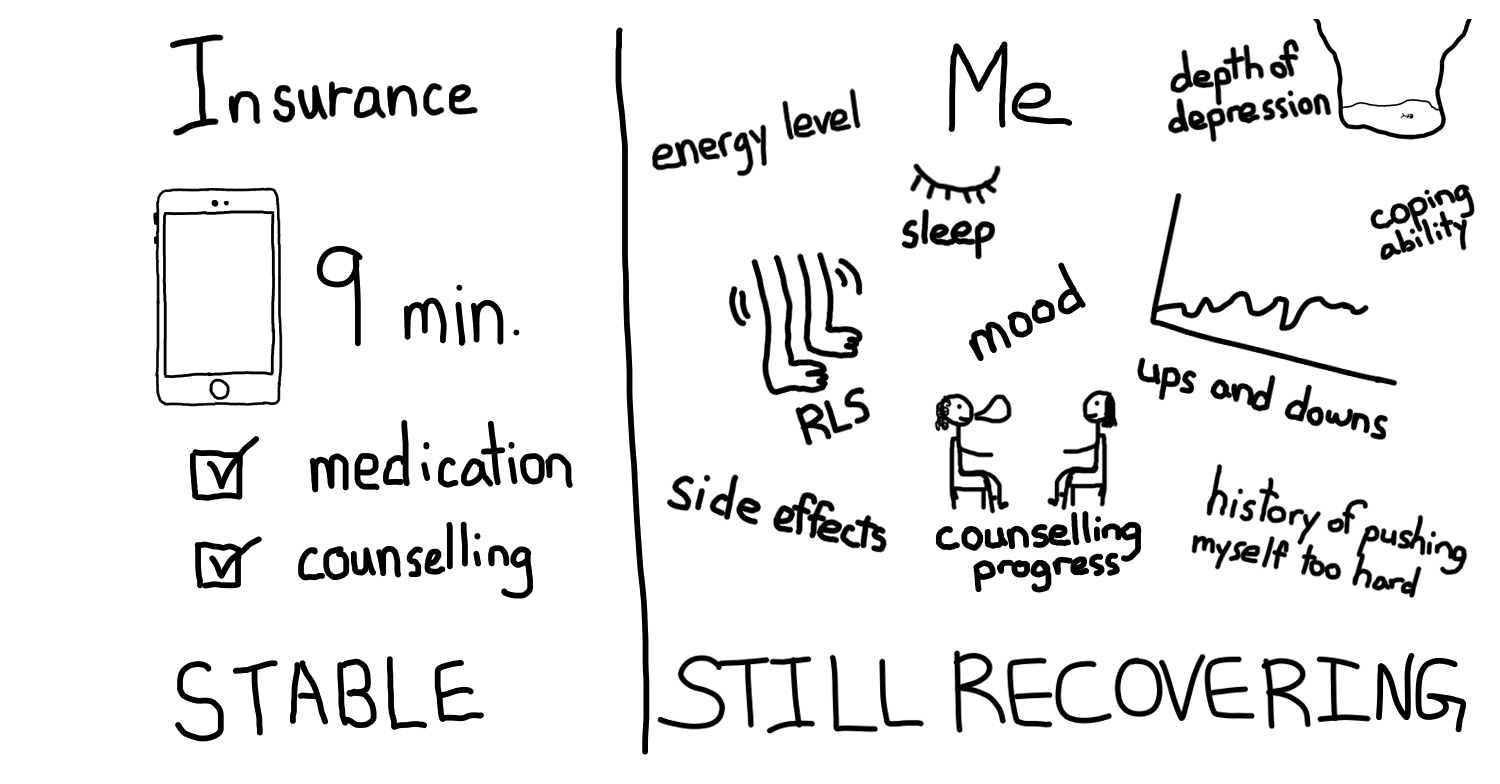 Please be advised that this post discusses suicidal thoughts.

Once I had been off work for a while in fall 2019, I had to start filling out insurance forms for long-term disability (LTD) in case my sick leave would extend long enough to potentially get LTD benefits.

It was stressful getting my doctor to fill out the forms. Anything to do with my doctor was stressful. He didn’t take the time to listen to me. He told me he wasn’t comfortable working with mental health issues. He complained about the mental health system and how he wasn’t in a position to help me but said it was impossible to get me in with someone who could (he should’ve been able to help me; my case wasn’t too complex for a GP). He yelled about how he could lose his license if I followed through on my suicidal thoughts.

The one good thing about a bad doctor was that he didn’t seem to have a lot of patients, so it was easy to get an appointment with him. That was helpful since the insurance company didn’t give me very long to get the forms filled out. However, it was stressful waiting for my doctor to send the forms in. Not long after my doctor’s appointment, the insurance company contacted me to say they hadn’t received the forms yet and they would have to issue a non-support due to non-participation in a couple days if they didn’t receive them. I followed up with my doctor a couple times and told him about the looming non-support. He had forgotten that the forms were sitting in his pile, but then he did send them in.

I got a phone call from one of the insurance company’s case managers. She asked me questions like how long it had been since my prescribed medication or dose had changed and if I was going to counselling. She asked about my plan for returning to work. I had been off work for three months and I was actually planning to return to work part time a few days later.

The case manager informed me that my situation would not normally qualify for a gradual return to work and that I would normally be expected to return full time. That was because my situation was considered stable. I was consistently able to attend counselling and support groups, and I hadn’t had a recent medication change.

I found it frustrating that doing good things for my health, such as going to counselling and support groups regularly even when it was difficult, meant to them that I was healthy and stable. It often took a lot of my energy to get to my support group or counselling and then back home. It was often my one activity for the day. Going to these meetings for an hour and then lying down afterward did not mean that I was stable enough to work 40 hours a week. It felt like I was being punished for going to my support group and counselling. It seemed like insurance wise, I would have been better off if I didn’t go regularly, but that wouldn’t have been best for my health.

I don’t know what they consider recent when it comes to medication change, but I had been on my new medication for four and a half months and my latest dose for two and a half months. I was still dealing with side effects of the medication that would lessen later but were quite pronounced at the beginning, such as exacerbated restless leg syndrome, which affected my sleep. It can take quite a while to adjust to new medication.

The insurance workers didn’t know me, my story, my history, how hard working I had been my whole life, how sick I was, how desperately I needed the sick leave I was on. They asked a few standard questions and got a few short answers from my doctor. The case manager talked to me on the phone for 9 minutes and 9 seconds. That’s all they needed to determine that I was stable enough to work full time.

However, the case manager told me she would do me a favour and approve a gradual return to work plan. I’m glad she did, but I was frustrated and angry that that was considered a favour. I knew I wasn’t ready to work full time, but according to their short assessment, I was.

I had been off work for three months. I returned to work part time in December 2019 and full time in January 2020. I started working from home when COVID hit in March 2020, and I was struck by how much I needed a slower pace and the ability to work on the couch after only working full time for two months. That made me think that I actually might have hurried back to work too soon.

My situation with insurance was stressful and invalidated my experience with illness and recovery. However, I had it pretty easy with insurance compared to other stories I’ve heard, which is disheartening. It sucks that insurance, which is supposed to help you when you need it, often comes with a long, stressful process and can be so hard to get.

Suicide is terrible and tragic. It can be hard to talk about. It can be frightening to hear about. I am not encouraging suicidal ideation as a solution or trying to shock and harm with my words. I am sharing a part of my story, showing what depression can be like. This is one very real and serious part of my story that should not be left out. Talking about suicide can be difficult, but talking about these thoughts instead of hiding them can save lives. I am not the only person struggling with a mental illness who has been in this place. Thankfully, I also have other parts of my story that include difficult and ongoing healing.

Ministries
The Writing Room
Comments for this post are now off.

Rebuilding a Broken Life: One Day at a Time