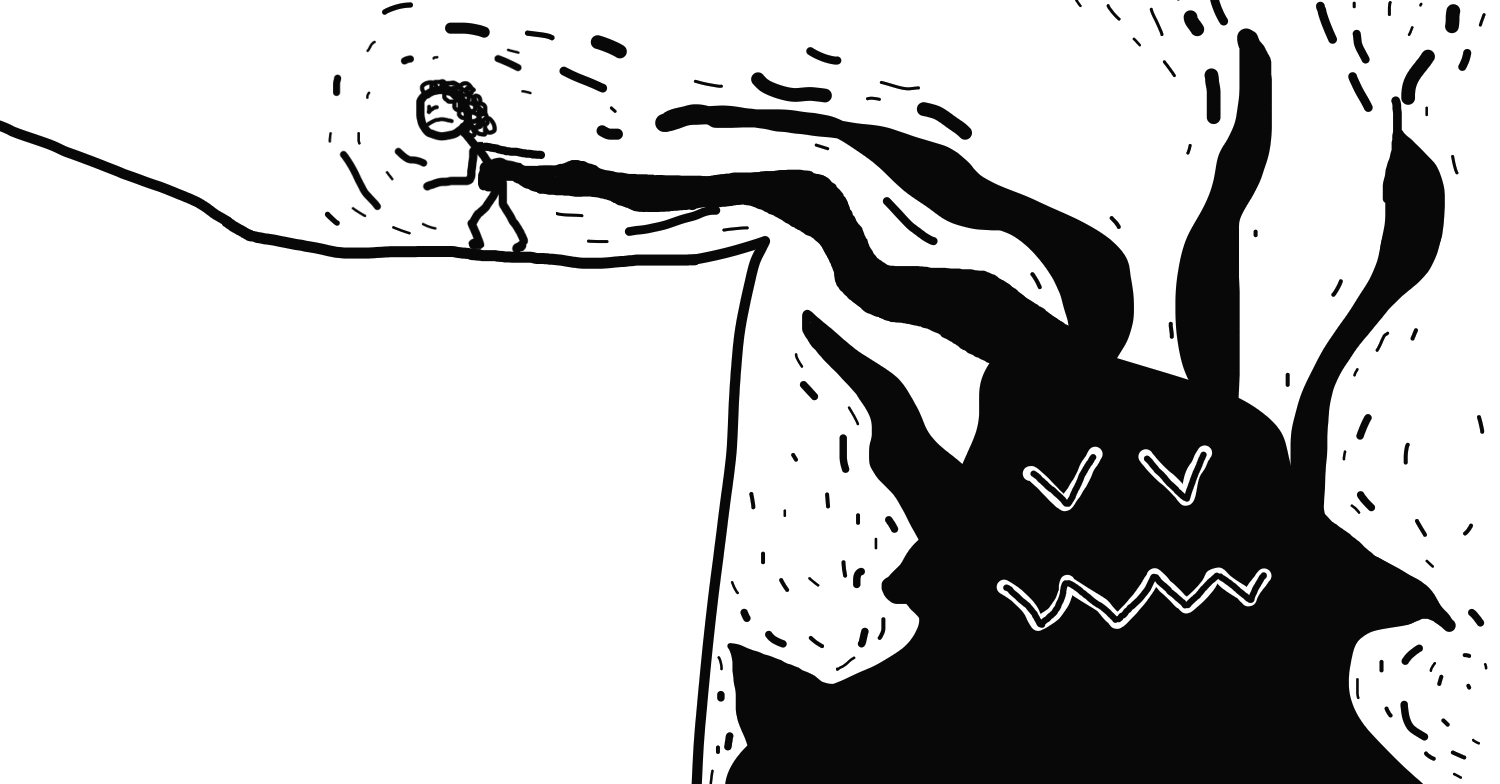 Different images for depression have come to mind at different points in my experience. Here are some of the ways depression has felt to me.

A Deep Pit
During my worst months, depression felt like I was at the bottom of a deep pit and there was no possible way of getting out. The view from the pit would sometimes allow for a glimpse of sky. I knew that life existed outside the pit, but there was no way for me to get there. Other times, my days were darker still and I couldn’t see anything beyond the cold, unscalable walls surrounding me. This was my new reality, and depression told me this would be my entire future.

A Grip on Your Heart
Depression is very persuasive in its lies. It tells you there is no possible way out of it. It tells you it has you firmly in its grasp, a strong hand gripping your heart, barely allowing it to beat. Depression convinces you that things are hopeless, that this is your life now, that your heart won’t be filled again.

A Marshmallow with a Dark Core
I picture myself like a marshmallow, but the marshmallow is not actually a marshmallow all the way through. The outside is white and fluffy, but inside is a hard, dark core. I experience some light, cheerful moments, but my primary state, my core, is still the darkness of depression.

A Lonely Path
I’m walking on a long path, slow and weary from the weight of depression. I’m not all alone in a vast expanse; I see other people, and they’re trying to help me. But they’re on their own paths, and there are invisible walls between each path, keeping us apart. I see the people, and it helps to see they are there, but it doesn’t help since they can’t quite come and walk with me. They can’t be right beside me. They can’t truly know what I’m feeling. They have their own paths to follow. I’m not alone, but I am alone.

Crying Wolf
I feel like the boy who cried wolf, asking for help and then asking again not long later. And then asking for help for the same thing not long after that. But the wolf really is there each time. I sense the wolf stalking, or I see its eyes, or I suffer in pain as it attacks me. But how many times can I ask for help before people get tired of helping me or think I’m crying wolf? How long until the people stop coming and I’m left alone with the beast?

A Moving Train
I’m starting to feel better and have more energy, but it’s hard to tell how much I can take on. When I feel well, it feels good to do things again and I feel motivated to keep going. I have momentum like a moving train. But then on the days I don’t feel well, I feel overwhelmed. It feels like the train is going too fast and I don’t have time to slow it down, so I crash. So many times I have felt like I’m doing well and have gotten going again, and then I crash.

A Pull Toward the Edge of a Cliff
Depression feels like a force pulling me toward the edge of a cliff. I can feel its presence as it pulls me closer. I feel the familiar darkness and despair. I fear going over the edge again. I haven’t yet found my way to a shelter of health. I’m still on the cliff and have to actively fight against the force trying to pull me over.

Wow, your descriptions of what depression feels like in different stages was so informative. Heartbreaking, but very helpful in educating me and others on what this journey is truly like for you and others struggling to deal with the darkness of depression. Thank you for sharing so openly, and thank you for fighting for your life and mental health. I am so proud of you!

So thankful you found your way out of that pit and away from the beast. Amazing. As a person who has only seen people I love in depression, not experiencing it myself, this has helped me understand so much more. Thank you.

Rebuilding a Broken Life: One Day at a Time