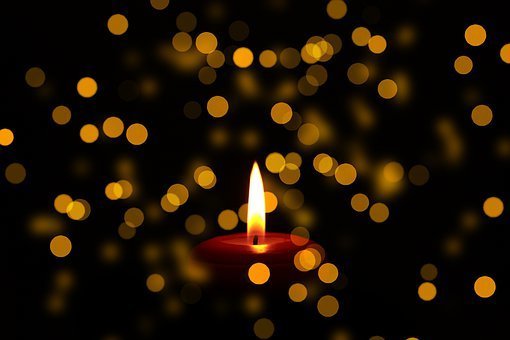 If Lazarus was my brother. If I was there in Bethany helplessly watching his health deteriorate. If I was mourning his death because Jesus wasn’t there to perform another one of his wondrous miracles that I had witnessed others receive. What would I have said when Jesus arrived? What would I have done? Where would the broken pieces of my heart have landed before Jesus called “Lazarus, come forth?”

I like rereading the well known stories of the Bible with fresh eyes. Going beyond the condensed Sunday school version and attempting to peek into the hearts and minds of the people involved. Trying to imagine the very real human emotions weaved throughout the story and how that affected their faith. And, well, honestly question how it might have affected mine.

This time I find myself in the gospel of John with a family that deeply loved Jesus, and whom Jesus dearly loved. Lazarus and his sisters Mary and Martha were beloved friends of Jesus and He often visited and stayed in their home.

Lazarus became sick and a message was sent to Jesus “Lord, your dear friend is very sick.” (John 11:3)

Mary and Martha called upon Jesus for help. Because they believed He could. But “although Jesus loved Martha, Mary and Lazarus, He stayed where he was for the next two days.” (John 11:5) What?! This was unlikely the response they anticipated from Jesus. These sisters had seen many of Jesus’ miracles firsthand. And yet He didn’t come when they needed their own miracle.

If I was desperate enough about my brother’s declining health to ask Jesus for His assistance and presence, and He delayed in coming, I would feel confused, fearful, distressed, dismayed, angry, hurt.  Abandoned and betrayed. My heart conflicted that the Healer chose not to heal this time. My time.

And then Lazarus died. The shock and unbearable grief mixed with the agonizing unanswered questions why. Why Jesus?

Jesus knew Mary and Martha’s utter pain and its glorious purpose. But the sisters didn’t.

“When Jesus arrived in Bethany, He was told that Lazarus had already been in his grave for four days.” (John 11:17) Four days. Not only did Jesus not come in time to prevent Lazarus’ death, now He was also devastatingly absent from gathering with the people who had come to pay respects and console his sisters. Oh, that added sting to be missing and aching for the love and comfort of your Lord when you need Him most.

I’m not sure what I would have done when I was told that Jesus was finally coming. Or what thoughts, questions and emotions would have propelled my behaviour. But I do know I would have struggled with the timing of His arrival. There would have been a battle in my soul between running longingly into the refuge of His embrace and stubbornly hiding in the bitter justification of my disappointment and pain. I know which would clearly be the best option, yet truthfully, I suspect I would do the exact opposite.

Martha went out to meet Jesus. Mary stayed home. The Bible doesn’t tell us the reason for either of their actions. But I relate a little more with Mary. I would have wanted Jesus to come to me with His hand extended. To coax me out of my self pity and despair.

Martha greets Jesus with “Lord, if only you had been here, my brother would not have died.” (John 11:21) Her words seem a bit accusatory and blaming to me. Probably because if they were mine, shamefully, they would have been. But her next declaration “But even now I know that God will give You whatever You ask” (John 11:22) shows both to be statements of deep faith. She is simply proclaiming what she knows and believes is truth.

Martha returns to Mary and tells her that Jesus wants to see her. “So Mary immediately went to Him.” (John 11:29) Jesus summoned Mary and she responded. Immediately. Not grudgingly like my default would be. And then “she fell at His feet and said, “Lord, if only you had been here, my brother would not have died.” (John 11:32) Mary falls at the feet of Jesus, still her Lord, still worshipping, still expressing her faith in His divinity. Me, I imagine myself either seeking a hug for my own comfort or keeping my distance with a guarded heart.

Jesus went to Lazarus’ tomb and asked for the stone to be rolled aside. Martha protested, “Lord, he has been dead for four days. The smell will be terrible.” (John 11:39) I would be concerned about the overpowering odour of decomposition too. But this is where I believe a spark of hope would grow in my spirit. Afterall, if Jesus desires to see Lazarus, a special moment must be about to happen. A vision, remarkable words spoken, a unique glimpse into Jesus’ heart. Something.

The tomb was opened. Jesus shouted to the dead, decaying Lazarus to come out. And he did! This must have been followed by shock and amazement. A joyful celebration. Magnificent worship. But the Bible doesn’t tell us what happened after Lazarus emerged other than “many of the people who were with Mary believed in Jesus when they saw this happen.” (John 11:45.)

But first, there was overwhelming anguish that engulfed Mary and Martha. They didn’t know God’s purposeful plan to bring His Son glory through the pain and suffering of their brother’s illness and death. And yet their faith remained strong. It wasn’t affected by their emotions or situation. It wasn’t based on the tremendous miracle they received. They loved Jesus anyway.

My miracles aren’t likely to be of the same magnitude as a resurrection. I may never know how or when God uses my brokenness for His glory. I may never understand the purpose of my pain in this life.

And that makes it hard to keep believing, to keep trusting Jesus when my miracle isn’t what I think it should be.

If Lazarus was my brother, I would have had a lot to learn from the steadfast faith of my sisters.

Julie about 2 years ago

Oh wow Cindy!! That was such an incredible piece! We tend to want things to happen when we want or think they should. But God’s timing is always perfect. He’s never late. What a wonderful reminder that we just need to remain faithful. Bless you!