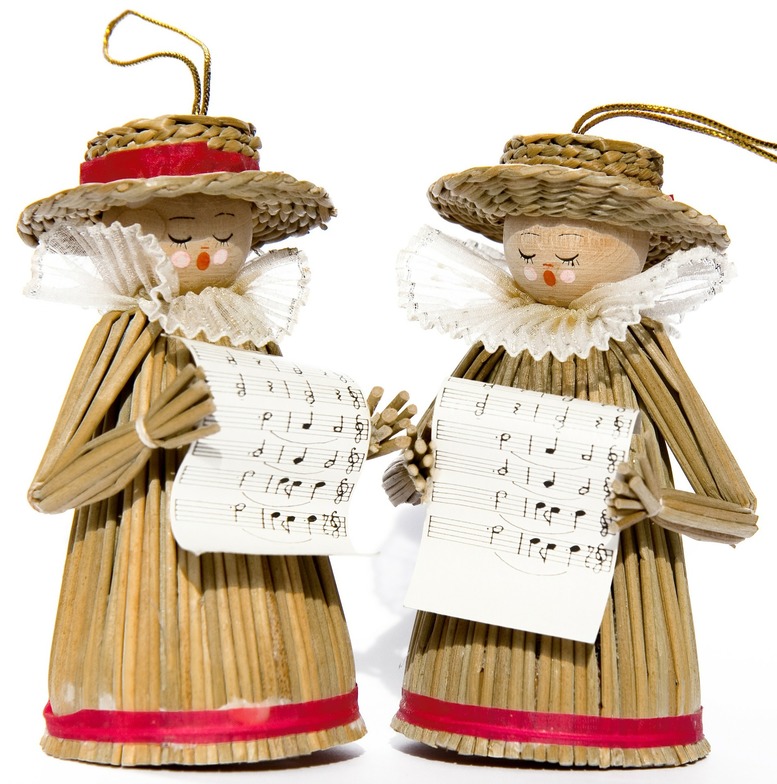 I love Advent and Christmas music (for this post, I’ll simply call them both Christmas music). There are so many beautiful Christmas melodies and texts. There are songs that convey both the longing and hope of Advent and the celebration of Christmas. Listening to this music, at different times I feel yearning, heaviness, hope, comfort, or joy. I listen with solemn quietness, I sing along with enthusiasm, or I dance with delight. Christmas music also warms my heart as it fills me with a sense of love and connection with my mom. She loves Christmas music too, and a lot of the music I listen to now I first listened to with my mom when I was growing up.

Christmas music has held this significance for me for years. The beauty, sacredness, and memories of this music have been striking to me. And yet, my appreciation for Christmas music has deepened even more over the last few years as I have learned more about the rich history of it. Some of our Christmas songs have histories dating back hundreds of years! Handel’s Messiah incorporates musical elements from several traditions.

The text of “O Come, O Come Emmanuel” has its roots in the O Antiphons, which are seven texts originally in Latin that each begin with a different name for Christ, such as O Wisdom, O King of the Nations, and O Emmanuel. Boethius, a Roman philosopher, showed some familiarity with the language of the O Antiphons in the sixth century, suggesting their presence as far back as then! The melody of this song comes from a 15th-century chant!

The tune of “What Child is This?” is called “Greensleeves.” Shakespeare mentioned this tune twice in a play he wrote in 1597, so it was popular enough back then that his audience would have known the reference. Around this time, the Greensleeves tune was used with all sorts of texts to make both political and religious points. The text of “What Child is This?” was written by marine insurance salesman and hymn writer William Chatterton Dix around 1865. The text was paired with the Greensleeves tune in 1871.

Messiah, an absolute masterpiece written by Handel, was written in 1741. All of the text is taken from the Bible. The text tells the story of redemption, beginning with the Old Testament prophecies and going through the life of Christ to his resurrection. Typical of Handel, the music of Messiah uses a mixture of traditions, including the French overture, Italianate recitatives and da capo arias, Germanic choral fugues, and English choral anthem style.

Additionally, Christmas music is a rare example of oral tradition in Canada outside of Indigenous cultures. We hear Christmas songs in church, on the radio, and at Christmas gatherings, so we come to learn them without studying them. We just know them.

This oral tradition in itself is special, and on top of that, this also connects us to the tradition of carolling and the history that led to that. In the 16th century, the word “carol” began to be applied to songs with a seasonal connection. The 18th century saw the beginning of congregational hymn singing, which gave us hymns like “While Shepherds Watched.” In the mid-19th century, folklorists began collecting and publishing native folk songs, and several books were devoted to Christmas carols. In the early 20th century, people would go out into streets to sing folk carols. Singing merrily from door to door was familiar and widespread. Most of the books and ballad sheets that people took with them didn’t have melodies written out. The oral tradition was so well established that just the name of the tune would be enough. Similarly, we still know a lot of Christmas songs through oral tradition today.

Gant, Andrew. The Carols of Christmas: A Celebration of the Surprising Stories Behind Your Favorite Holiday Songs. Nashville: Nelson Books, 2015.

Now that’s a lot of history! It is strange that we just grow up “knowing” Christmas carols. They are so entrenched in our celebrations from a young age that you can’t remember where or when you first heard them. Amazing and interesting facts Kristen!

Relient K - I Celebrate The Day (I think this song would be way more popular if it was covered by a more mainstream band. I really like it)
https://www.youtube.com/watch?v=vh99QLRCxK4&list=PL260HUkFNDy1cOrwUP1qKt_JGM8I0Bucp&index=8

Amy Grant- Highland Cathedral (Cause this was on an album I heard a lot at Christmas growing up and I like bag pipes)
https://www.youtube.com/watch?v=ztXKXuau7Fw

Oh yes, those three are all great. I just listened to that version of "Mary Did You Know" for the first time and I really like it.

It's hard to choose favourites! One of my favourite Christmas songs is "What Child is This?" I have a lot of versions of it and don't have one particular version that is my favourite. I also like "O Come, O Come Emmanuel."

One of my very favourite Advent and Christmas albums is Proclaim the Bridegroom Near. It has lots of beautiful and haunting music and lyrics, lots of Advent texts, some folky pieces too, and a piece with banjo and cello in it! This all makes up a varied but coherent and great album!
https://chicagometropresmusic.bandcamp.com/album/proclaim-the-bridegroom-near

I like Christmas songs in folk and classical styles. I like choral pieces and organ. I have a bunch of other things I like too like Ellington's Nutcracker (jazz), various instruments and ensembles (classical guitar, saxophone quartet, orchestra, etc.), and certain artists I like, such as Josh Garrels.

Here's a song from a folk Christmas album I like:
Dark December: https://www.youtube.com/watch?v=y3Wx3-2wJ_U

A great Gospel piece:
Glory to the Newborn King: https://www.youtube.com/watch?v=fW6Ry9BrDBo

I Celebrate the Day is also one of my most favourite Christmas songs. I also have never been able to understand how such a beautiful, deeply touching song is not more mainstream and widely known. It absolutely should be. In my mind, it is right up there with Mary, Did You Know? which is another one of my favourites. And of course, I don't know any song that brings more joy than Joy to the World!